Blog – Through Thick and Thin

You may have a personal opinion for or against the result of the recent Brexit vote in the UK (in case you’ve been off the planet, they voted to leave the European Union…).  But one bit of good news for any US business that needs premium viscometers is that the Brexit vote quickly resulted in a better exchange rate for the US Dollar against the British Pound.  That means you can currently buy Hydramotion viscometers at lower prices than we’ve had in years – and thus improve your process control with precision viscometry, whether you need  inline XL7 or ViscoJet viscometers for oils or food processing, a ReactaVisc for the lab, or Viscolites for ink samples on the production floor.

Currently the Pound (GBP) is about 9% lower against the Dollar (USD) than it was before the Brexit vote.  There’s no guarantee of where that exchange rate will be in a month, but we will work with our customers to pass along the most favorable prices we can.  If you’re thinking about purchasing and have been postponing or letting the decision slip, you may want to accelerate it and make your CFO happy!  Contact us to figure out the best approach for your specific situation.

A common question is how the Hydramotion torsional vibration (resonant) viscometers are different from the older rotational devices.  On the surface the technologies may sound similar, but they’re completely different, and in many cases you’ll get different measurements with the same fluid and conditions.   That’s another question we also get a lot: why does my Brookfield lab viscometer give me viscosity readings that are so much higher than my Hydramotion inline XL7 (or ViscoJet)?  Here are some of the basic answers.

Rotational viscometry dates back to the mid-20th century, along with dial telephones and gas-guzzling cars.  The most common commercial versions use a motor-driven spindle or bob immersed in the fluid in a sample cup of a specific size.  The torque required to turn the spindle in the fluid is a measure of the fluid’s viscosity.  The geometry of the spindle and cup and the spindle’s rotational speed must match the fluid’s properties, and the cup and spindle must be changed for different viscosity ranges.  Rotational viscometers typically operate at very low shear rates.

While vibrational viscometry technology was also conceived many years ago, the resonant torsional vibration method wasn’t perfected until Hydramotion figured it out about 20 years ago.  Vibrational viscometers work by creating waves within the liquid, 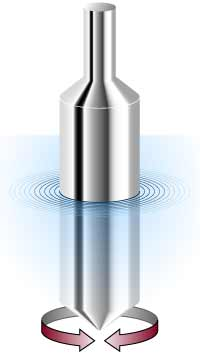 and there are many types of waves that can propagate in a liquid, but the specific type is critical.  Viscosity is a shear measurement that can only be truly assessed under shear conditions, so the Hydramotion technology uses shear waves.  Other types of vibrational waves are avoided since they can behave unpredictably in real-world process environments.

That may sound complex, but in operation these units are simplicity itself.  In the most common configuration, the solid stainless steel cylindrical sensor is submerged in the fluid and vibrated at its natural frequency around the long axis.  The dissipated energy from the fluid’s resistance is measured electronically and equated to viscosity.  All the action takes place near the sensor surface, which means these instruments aren’t affected by pipe or tank sizes, flow, or any of the things that limit other techniques.  This brings huge benefits: high accuracy, robustness and virtually no maintenance.

This is done at very high shear rates, which has some key advantages – especially for non-Newtonian fluids, where viscosity is a function of shear rate.  One great advantage is the high in-process repeatability, normally achieved only in Newtonian fluids.  Another is that true viscosity changes are measured – some low-shear devices (including rotational viscometers) can impart sufficient shear energy to alter the effective viscosity of the fluid.  We’ll get back to that in a future post.